In My Life (The Beatles)

Major song by John Lennon (of which Paul McCartney will claim part of the melody and the guitar riff of the intro) In My Life was released on the album “Rubber Soul” in 1965. John comes back to it with a certain nostalgia for his Liverpool years. We decided to make it an instrumental version because the accompanying part is not necessarily very original but the melody is so beautiful that it’s a pleasure to play it with the right hand.

The song starts with the right hand guitar riff and the original left hand bass part. Notice how wonderfully the two intertwine with each other, both rhythmically and harmonically. The general left hand bias on this song was to take the basic pop-rock bass groove (dotted quarter note/eighth note) and to insert on the second and fourth beat an eighth note on the characteristic note of the chord, usually the third (in the tenth position). Thus just with two notes we hear the whole harmonic sequence scrolling freeing the right hand to expose the melody. And what a harmonic sequence! The piece is therefore in A major and starts with a B (9°) at the melody. At the second bar of the verse (bar 6) we find a A7/G (secondary dominant) which will go on the D which will become Dm. For an autodidact of the 60’s what a harmonic subtlety! On the chorus at bar 18 we have a B7 foreign to the key and which will go on top of that on a Dm (and not an E as we could expect).Little anecdote about the instrumental bridge (part C). John didn’t really know what to do on this part (guitar solo or other?) and during a break George Martin found himself alone in the studio and recording the part we know and that I transcribed. But as he wanted a kind of harpsichord or baroque piano sound he slowed the tape down by half and recorded at the lower octave. The Beatles’ first studio tinkering had begun. Needless to say, when the band came back from the break they kept the take, visibly amazed by the musical and technical performance.

The part is quite fast (sixteenth notes at 104 bpm). If it seems too fast to you, also considering the move in the fretboard, you can always play your own solo on the grid. But the part is interesting to work on by setting it well on the eighth notes of the bass. The rest of the piece is a repetition of the parts already seen with a “fermata” just before the coda.

This song in its innocuous aspects is full of harmonic and melodic subtleties. John will describe it as “his first truly great song”. He can’t be wrong. It is a marvelous illustration of the self-taught genius of such young composers (25 years old at the time). 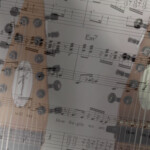