Released in 1969 on the album “Abbey Road” Because is one of John Lennon’s major compositions. May be influenced by Beethoven’s Moonlight Sonata (in C# minor like the song) that Yoko Ono played in his presence. What is sure for Paul McCartney is that Yoko would have influenced John a lot for the lyrics. The wind, the earth, the sky being recurring themes for her. In any case John liked these lyrics which he found “clear, without bullshit, without imagery, without obscure references”. For George Harrison it is the best song on the album because he liked the three-voices harmonies. It is also the return of a major contribution from George Martin (his role had greatly diminished over time) because it is him who will write the voices harmonies. And this may be the last moment when the Beatles will work together in perfect harmony, in a semi-circle around the microphones with the lights dimmed for more than 5 hours. The voices will be tripled and George will add the final touch with two parts of the Moog synthesizer, one of the first models he had just acquired in California. This set makes Because one of the most magical songs of the band.

For my Stick version I chose to make an adaptation of the harpsichord, guitar and bass parts on the bass block and to play the integral part of the three voices on the right hand. This leads to a number of difficulties. Given the tuning in fifth, the left hand has a difficult fingering and a certain number of movement on the fretboard, but this part allows us to do a remarkable work on the arpeggios on the bass block. For the right hand, the three-voices harmonies force us to move quite quickly on three-sounds chords. It takes a lot of practice to achieve a supple, fluid and sufficiently legato playing to reproduce the vocal inflections and not to end up with a too much plated harmony. But given the beauty of the work all this is worth it and the result can be magical.

I also added a purely accompaniment version with melody and lyrics where the right hand plays the harpsichord/guitar part and the left hand the bass. This version is obviously more affordable.

Be the first to review “Because (The Beatles)” Cancel reply 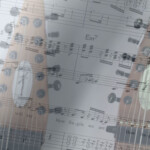