Lady Madonna was released as a single in 1968, and was composed by Paul McCartney. It is a tribute to women who work while carrying out their role as mothers, a subject that was already topical at the time. The composition is built around the piano part, a kind of boogie in the spirit of Fats Domino.

The Beatles recorded it just before their meditation stay in India. In addition to the usual Beatles instrumentation they added a saxophone section (two tenors and two baritones). Paul didn’t have a precise arrangement to propose so they made it very simple: a lot of double riffs (horns and saturated guitars plugged into the same amp), imitation horns on vocals, tenor solo. This also gives a lot of energy and spontaneity to the song.

For the Stick version I transcribed the right hand of the piano on the melodic block and took over the whole bass on the bass block. The melody will be made by a voice (yours or a singer’s). The whole riff thus constructed is really not easy to set up but take patience, work slowly and decipher well how each hand coordinates with the other.

The verse A in A major turns on the same riff as the intro. Chorus B, in C major, unfolds a very jazzy grid: II / V / I / VI then another II / V to come back in A major. The right hand plays the chords in quarter notes and the left hand a kind of walking Bass in eighth notes which follows the joint movements of the harmonic progression. Another perfectly constructed bass line. Note bar 16 where I took the left hand of the piano which plays the octaves in eighth notes while the right hand plays the chords on the counter-time, very boogie-woogie.

The rest of the song is a series of repetitions of the parts already described. The structure is quite complex.
I hope it will be clear enough on the score. Feel free to work the song on the original. The only problem, probably due to the bastringed piano (which was a Steinway anyway), is that the whole thing is not at 440Hz. So either you lower your Stick (which is not really practical with 12 strings) or you find a software or an application that allows you to edit the piece 20/25 cents of tone down.
Finally the song ends with a little coda that starts after a 2/4 bar (bar 41). Again note the surprising presence of a C minor in an A major piece.

Be the first to review “Lady Madonna (The Beatles)” Cancel reply 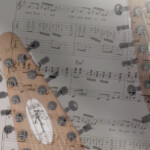