Released in 1968 on the Beatles’s White Album Blackbird is one of Paul McCartney’s emblematic pieces, inspired by JS.Bach’s bourrée in E minor. The recording session took place on June 11, 1968 over a single day (but still with 23 takes) with Paul alone (John was present at the beginning of the session) George Martin and Geoff Emerick the sound engineer. A guitar alone, a voice (doubled on the chorus) and a beat (which is not a metronome, because the tempo is not regular but simply the beat of his foot on the ground). Wishing to reproduce an outside atmosphere he finally recorded in a small open air space next to the Abbey Road echo chamber. The whistling of the blackbird was added later but all the ambient sounds are natural.

The lyrics, beyond their simplicity at first glance would be (according to Paul) a metaphor for the civil rights struggle of black Americans. Martin Luther King had been assassinated a few months earlier.
The song is based on the finger picking technique. But it is Paul’s self- taught version of finger picking.

The song is in G with an F modulation on the chorus.
For our Stick version (which is an adaptation of the guitar part) none of the hands play chords but single notes. The left hand plays a bass line of quarter notes in joint movement with some chromaticism and the right hand a drawing of eighth notes with a characteristic note of each chord on the first eighth note and the G as a pivot note on the second eighth note of each beat on the INTEGRALITY of the piece, witch reinforces the hypnotic side of the composition. Note the use of secondary dominant on the bass chromaticism. Bar 5: A7/C# goes up to D, B7/D# goes up to Em. Also the major/minor sequence (bar 8) and the use of bass inversion: G/B bar 9, C/E bar 13. In other words, a whole harmonic complexity at the service of a simple and clear melody. All the genius of Paul’s composer.
Blackbird is the first piece that allowed me to enter the universe of the Beatles on Stick. I hope that you will take as much pleasure as I did in working and playing this magical and mythical piece.

Be the first to review “Blackbird (The Beatles)” Cancel reply 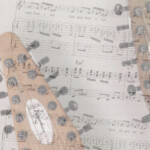