Eleanor Rigby, a song by Paul McCartney, was released in 1966 on the album “Revolver”. As with Yesterday, the idea for the double string quartet came from George Martin. This time the strings are not a distant accompaniment because there is no guitar but they are the only musical support to the melody. Paul let himself be convinced on the only condition that the musicians don’t use any vibrato and play the parts with “bite”. George Martin was inspired by Bernard Herrmann (composer of Alfred Hitchcock’s Psychosis soundtrack) to write the score. This is characterized by his very hammered Staccato.

Goeff Emerick the young sound engineer (only 20 years old) will accentuate this side by placing the microphones very very close to the instruments (heresy at the time at EMI). This annoyed the classical musicians who moved the chairs away between each take. But Emerick will reposition the microphones each time.
The whole Stick part of this arrangement is based on the transcription of this quartet. Imagine each finger as part of the quartet. The left hand for the cello, the 1st finger of the right hand for the 1st violin, the 2nd for the 2nd violin and the third for the viola. A true 4-parts writing. And always in this idea of “multi-voices” think each finger independently, being able to play at the same time as the others, or play alone or with another, staying in place to hold a note while one or more others move. All combinations are possible. This is one of the secrets of the right hand Stick playing. A purely pianistic technique or of some jazz guitarists.
Harmonically realize that this masterpiece of composition is based on only two chords: C and E minor, all the melodic art of Paul and the orchestral writing talent of George Martin!
For the intro: a (very high) two voices melody, on the first three bars of the right hand a chord has three sounds of C but letting the high note (the G) sound, the other two fingers playing quarter notes on the root and the third and the bass playing the cello counterpoint.

Notice how the cello counterpoint is perfectly placed rhythmically in relation to the voice. Then at the end of bar 3 the violin pattern starts. There are several possible fingerings. I have chosen two different ones for this bar and the reprise. As the right hand becomes a single note I chose to play a kind of block chord ( root/octave/fifth) with the left hand to keep the continuity to the four voices. At the end of the pattern (end of bar 4) the syncopated G remains held and the other two fingers return to the first beat of bar 5 (Root/third) according to the same “multi-voice” concept (I repeat myself!). The other four bars of the intro are repeated but with a different cello counterpoint and a different fingering for the violin motive.

The verse: simple triads on quarter notes (very marcato) but with an amazing harmonic section. The couplet turns twice over five measures: three measures of E minor, one measure of C and one measure of C (2 beats) and E minor (2 beats), all twice.

Compared to our times of hyper-standardized and square structure, an odd construction in a planetary tube makes one dream. And above all, you don’t even notice it when you listen to it as it all sounds so natural. On the last five bars the right hand plays eighth notes, which are also very pricked in the spirit of the strings.

We arrive at the chorus. The right hand remains static on a triad of E minor in quater notes, while the left hand holds a root E in a whole note and the available fingers perform a chromatic descent on a very James Bond minor (m7/m6/m6b/m) and finally last bar (bar 26) a small violin motif which allows us to go back to the verse.

Verse 2: same thing on the first three bars of E minor then on the bar of C a superb upscale of lydian C in eighth notes on the cello and there again look how the bass falls in relation to the right hand: syncopated while the right hand continues to hammer the beats. In the second part of the verse it is now the right hand violin part that plays a counterpoint. Note once again how each hand rets in relation to the other. Also the presence at bar 33 of a C# as in the melody. Here again a wonderful melodic subtlety with a C# on E minor and a C natural on the C chord. Same chorus and reprise of the intro. Beginning of the last verse: a new violin motif in double notes then Father McKenzie comes into the light with the cultissimo cello contrepoint bar 58 which will double the melody but starting on the offbeat of the third beat of bar 58, exactly where the phrase of the melody stops (Father Mc Ken-zie) and join the beginning of the next melody at bar 59. What an arrangement!

I hope that my explanations, as precise as possible, will have allowed you to get to the heart of this extraordinary composition, which is for me one of the strongest in pop music, and music in general.

Be the first to review “Eleanor Rigby (The Beatles)” Cancel reply 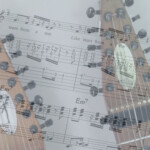