Lucy In The Sky With Diamonds (The Beatles)

Lucy In The Sky With Diamonds

Released in 1967 on the mythical album “Sgt Pepper’s Lonely Hearts Club Band” it is an emblematic composition by John Lennon. Paul McCartney will bring just a few pictorial words to it (cellophane
flowers / kaleidoscope eyes). According to John, no hidden symbol of LSD or drugs but just a song triggered by a drawing of Julian, his 3 years old son, representing his girlfriend Lucy in the sky with diamonds. He thinks the title is great and goes with it. But the misunderstanding is there and the song will be banned on the BBC when it comes out.

For this Stick version I tried to take the essence of each part and transcribe it on the instrument.
The left hand takes over the original bass part in its entirety and the right hand walks between the harpsichord, the guitar and the organ. The piece begins in D major.

On the intro and the verse A the right hand plays the harpsichord arpeggios (which is actually played with an organ) and the left hand follows the bass descent with its chromaticism.
On the second part of verse B we switch to F major. The right hand plays the triads of each chord (which corresponds to the guitar part), the bass plays the roots. Note the bass arpeggios characteristic of Paul’s playing. On the chorus we return to D major. The right hand will play a kind of reggae (which didn’t exist yet in its form) on the 2 and 4 beats which corresponds to the organ part and the left hand the typical McCartnian bass part which he himself considers as one of the best of the album.

The structure will repeat itself with the elements we have seen.
Just be careful that verse 3 is shorter and skips the whole B part of the verse.
Finally the song ends on a “fade” with the chorus in a loop.
Once again visualize how all the parts (vocal/melodic/bass block) fit together. It’s not necessarily very difficult but very well constructed and just by looking at it you can see why “it sounds great”. 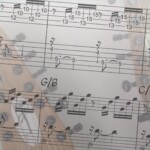