These pedagogic PDFs will offer you possibilities to discover new chord positions, and will help you in the search for new harmonic colors.

For a long time, I have been looking for ways to try to get out of the “classical” right hand chord positions on the Stick. These work perfectly, and my approach was not a questioning of this practice but just a desire for new harmonic colors.

While discovering Rick Beato (wonderful teacher) on the net (I encourage you to watch ALL of his videos on YouTube), I stumbled upon the concept of spread triad, a technique that comes from the piano or the guitar, and that can be found in classical music as well as in Pat Metheny’s first songs (especially in “Bright Size Life”). It simply consists of transposing the second note of the chord one octave below the first note on a basic triad. Let me explain: you take a simple triad of C major C/E/G, and you lower the second note (i.e. E) to the next octave below. You now have the following voicing: E/C/G. And you do the same for each inversion; E/G/G becomes G/E/C; G/C/E becomes C/G/E. We have much open chord positions here, and therefore different sounds. Whereas with the traditional position and its inversions, we find between the notes intervals of thirds and fourths, here we have intervals of fifths and sixths, which have totally different sound colors. Again, the point is not whether one color is “better” than the other, but just to have an additional sound palette.

And, what we do with a major triad, we can do with all the chords of 3 sounds. Moreover, since on the Stick we can easily break down the chords into a foreign lower triad (e.g. C major7 breaks down to E minor in the right hand with a C bass in the left hand), the possibilities, without being infinite, are immense.

The first PDF “Spread Triads on Stick” is therefore dedicated to this technique, with the 3-sound chords I was able to list. This makes a significant number of them in each family. Some positions are easy,

others more complicated, and some are downright difficult. Your fingers, your muscles, will have to adapt to these new positions, it takes time. You probably won’t be able to integrate these notions quickly into your game, but keep working on them, little by little it will become more and more natural. Above all, it leads you to think of your positions in terms of voicing: where does a certain note go in the next chord? Which note stays in place? – And no longer in terms of mechanical position. It’s a much more musical approach.

Once again, this does not compete with traditional positions, but will allow you to better control your voicing. Do I want a sound with a more “open” or “tighter” harmony? You will have the choice.

The second PDF is directly inspired by a tutorial I found on YouTube, made by guitarist Jens Larsen (which I also encourage you to follow). Like Rick Beato’s one, it perfectly matched what I was looking for for the Stick, namely: how to find interesting voicing with 3 sounds for the right hand, the left hand being dedicated to a bass line? Some concepts overlap with the previous chapter.

Jens Larsen begins by breaking down the triads using a standard jazz harmonic progression II/V/I. With the separation of the two hands: triad in the right hand and bass in the left hand this approach is particularly well adapted to the Stick.

Then, he talks about the concept of spread triads, idem to Rick Beato’s concept, stated in the first PDF, on the same harmonic progression (II/ V/I).

Thirdly, he talks about a very interesting concept of “Quartal Voicing”. That’s good, we are tuned in fourth to the high block of the Stick. So on the IIm7 and Imaj7 we will use a fourth tuning voicing on the scale of the key (in this case C major). We take the fourths as they come in the key, sometimes perfect fourths, sometimes augmented fourths.

For example at bar 13 the first chord (E/A/D) is a perfect fourth chord while the second (F/B/E) mixes augmented fourth and perfect fourth. On a minor chord, these voicings sound very jazz modal “Miles Davis, Kind of blue” period. These colors are very interesting in the Stick. On the Altered G (bar 15) a much more modern color (very John Scofield), with the same principle, but on the scale of Altered G – super Locrian (G, Lab, Bb, B natural, Db, Eb, F), i.e. Ab melodic minor. But here, rather than talking about real fourth chords, let’s talk about chords made up of every fourth note of the scale. This will give us fourth chords, chords sus4-maj7, chords #9 and dominant (or dominant b5) chords. I let you discover all these colors (bars 15 and 16), as well as the example on a II/V/I (bars 17 to 20). It’s really a concept to be experimented on the Stick to open to modern jazz sounds.

The last chapter follows a little from the previous one. But this time with chords called “Shell Voicing”, that is to say chords without a fifth, with only root / third / seventh. Same principle on the IIm7 and the Imaj7: Shell Voicing on the key scale (in this case C major). You will have to get used to these new chord positions. Again no stacking of thirds but an alternation of thirds and fifth (or augmented fourth).

For the 5th degree (bars 23 and 24) same principle with the scale relative to the chord, i.e. Ab melodic minor for altered G. Here again, new sonorities, Abm-maj7 / B major7… Try all these voicing while keeping a G pedal in the bass, and soak up these colors. Finally, the last four bars offer you an example on cadenza II/V/I.

I hope that these PDFs will allow you to experiment all these new harmonic roads that have revolutionized my approach to a more modern Jazz on Stick.

Again, all this is not there to replace the classic positions of third chords and inversions that work perfectly. But just to offer you additional possibilities, new harmonic colors…

The harmonic history of the Stick is still to be enriched. 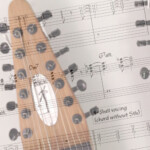