Title released on David Bowie’s twenty-sixth and last studio album released in January 2016 a few days before his death Lazarus is a prophetic song where Bowie speaks between the lines of his coming end. Faithful to his enigmatic character, he hid from everyone, even his musicians, the seriousness of his condition as if to stage his departure 2 days after the worldwide publication of the album. On this one he surrounds himself with the new wave of New York jazz musicians, including Brad Meldhau’s drummer Mark Guilana, and finds his faithful producer Tony Visconti.

The track, based mainly on two single chords (A minor and F), is built around a powerful and hypnotic bass riff played by Tim Lefebvre. My adaptation for the Stick takes up this riff played on the bass block and the right hand will take up the saxophone patterns in response to the vocal.

The song starts with an intro where the melodic block plays a continuous sixteenth note pattern (surely played in the high notes from the bass to the pick in the original version). Then the four bars of the bass riff come in. Take the time to work on them as they make up 80% of the song. The little fill that we find on the last beat of the F chord (bars 2 and 4) is not easy to fingering on the Stick (with the fifth tuning). Work on it then you can also find your own fills to break the linearity of the pattern. The right hand plays the sax part, very simple, in quater and half notes but look at the placement, the phrase starts on the 3rd beat of the bar. If the bass is repetitive, the sax part, even if it is rhythmically identical, doesn’t stop changing its harmonization. I have noted very precisely Bowie’s vocal part with its very particular timing. No two phrases are really identical in rhythm. It’s quite remarkable when you go into detail, which the score allows.
Let yourself be hypnotized by this music with its twilight lyrics. Repetitive and always slightly different.

At the letter B a kind of bridge begins with a rhythmic release (only half note in the right hand and the stop of the bass line) but with a very bluesy tension in the voice. Bowie sings an E flat on a C chord (blue note). Then at the letter C the gimmick starts again but this time I integrated the guitar rhythm on 2 and 4 beats when the Sax phrase allows it. This brings the energy up a notch. Look also from bar 50 the part evolves with the arrival of triads to reinforce the crescendo. Then comes a solo part turning on the four bass bars. Even if this passage is obviously not easy, if you manage to “forget” your left hand, playing this solo is a real pleasure. Don’t hesitate to work with a distortion to make the sauce rise.

Then the ensemble comes back down with the reprise of the intro, this time with the bass playing in tune with two sounds reinforcing the lyricism of the ensemble. And finally the piece ends with a bass drone of sixteenth note on A, while the right hand plays the two chords in double notes. Note the slide in fourth bar 68 to return to A minor. In this riff try to let the high A sound during the chord change and to raise only the E on the F. Always in the “multi-voice” spirit where all fingers do not strike the strings systematically together.

That’s it, you’re at the end of Lazarus’ path. Beyond the circumstances of the album’s release, this track conceals an incredible strength and intensity. And proves once again the magic of Pop Music: taking us on a journey with two chords and a four-bar bass riff.

Be the first to review “Lazarus (David Bowie)” Cancel reply 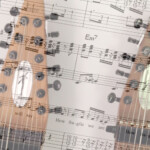