Released in 1987 on Sting’s second solo album “Nothing Like The Sunn”. The British man in a song is Quentin Crisp, a writer and gay icon, who went into “exile” in the Big Apple, considering England still has a lot of weight on the issue.

From the team of the first album “The Dream Of Blue Turles”, only Kenny Kirkland remains on the keyboard (with a nice pizzicato strings part) and Brandford Marsalis (whose interventions constitute one of the must of the title), to which are added various guitarists (following the titles: Andy Summers, Eric Clapton, Mark Knopfler) and Manu Katché on drums. Sting himself playing all the bass and electric double bass parts on “Sister Moon”.

I chose to make an instrumental version. The left hand represents a transcription of the pizz and bass part. One finger plays the fundamentals and the other fingers play the pizz offbeats on the characteristic notes of the chord (generally the tenths). Start by working only this part with your left hand to sit the piece down well. The right hand plays the melody.

The verses, the choruses and the ending ad lib turn on the same three chords (E minor / A / B minor). That is to say the major part of the piece. On the refrain don’t be afraid to accentuate the “march” side of the fundamental / fifth alternation in the bass. This will distinguish it from the verse, which is more open, with only half notes in the bass.

The bridge (letter C) develops on a more extended grid in D major, with a single foreign chord measuring 35 (one A#°). At letter D the jazz solo with a doubled tempo, that you can play as many cycles as you want. Then back to the structure with a verse without reprise (8 bars) then an Ad Lib that loops over the chorus on which Sting sings two voices: the one from the chorus and a counterpoint taking up the end of the verse.

As this is impossible to reproduce simultaneously on the instrument, I suggest alternating between these two melodies.
If you want to make an accompaniment version only you can divide the part of the bass block on both hands. The left one does the bass and the right one does the offbeat chords. It’s as simple as that. Emblematic song of the 90’s Englishman In NY continues to have a strong impact on the public 33 years later. And it’s a great song, very nice to play on the Stick. Which doesn’t spoil anything. 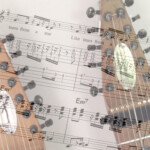