Skip to content
View basket “Lazarus (David Bowie)” has been added to your basket.

The Prelude in C major (BWV 846) is the first prelude to Johann Sebastian Bach’s “Well-Tempered Keyboard” compiled around 1722. The popularity of this piece, beneath its apparent simplicity, should not hide its harmonic complexity. In fact, Bach devoted several reworkings to it. Gounod popularized it in a sung form, the Ave Maria, by changing its key to F for singing.
The piece is built on the same rhythmic model from beginning to end. Namely two notes held in the left hand, generally fundamental and tenth, but also bass inversions and series of pedals, and sixteenth-note arpeggios in the right hand. The whole results in a continuous sound, characteristic of the broken style of 17th century French harpsichordists. For remember that the harpsichord did not have a sustain pedal. There is no melody as such, but it is the sequence of arpeggios that guides the harmonic path. Although in C major the piece goes through a lot of harmonic meanderings from Bach’s genius. All the dissonances are brought and resolved in a natural way. And dissonances there are! Seventh chords, diminished chords, a F chord with an E (7th major) in the bass, a 7th major chord, sus4 chords, pedal chords (bars 24 to 32). Almost all 12 semitones of the chromatic scale are used (except A flat). It is to underline this modernity that I have noted the chords with a jazz notation. This is totally incongruous for a baroque piece but it proves the visionary side of Bach’s music. And that will allow you to play a solo on this wonderful grid if you want to take the piece elsewhere. Moreover some people have made very beautiful versions of it (Jacques Loussier and Maurane among others).
I hope that this transcript will allow you to enter the world of Bach and make you realize that music is a path built over several centuries and that if we are lucky enough to be able to play altered today Bach was the precursor. And as he did this through the rigor of classical harmony and counterpoint he was not burnt but was a genius recognized from his lifetime to the present day.

Be the first to review “Prelude In C Major (J.S.Bach)” Cancel reply 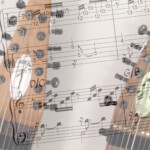